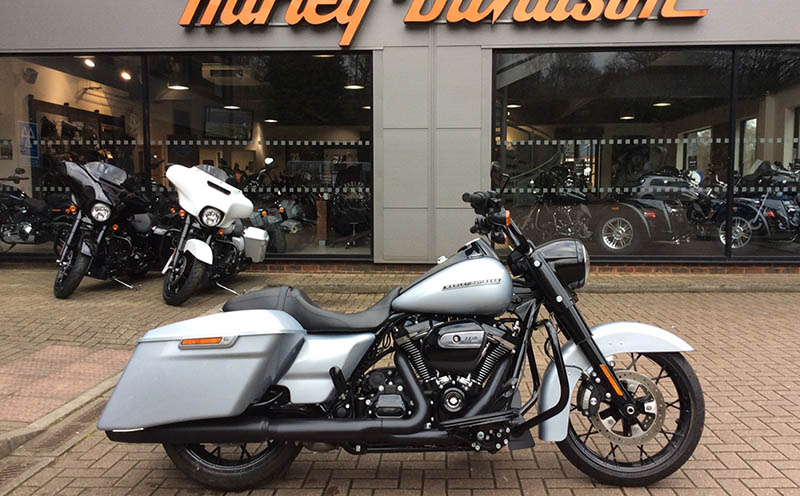 That means, for large capacity v-twin engines, a lithium battery can deliver a bigger kick to the starter motor, meaning your Harley will start easier and faster with a lithium battery. As far as we’re concerned the best Harley-Davidson battery is a lithium one, hands down. We’ll explain why in our review below.

The weight saving might not be such a big draw for Harley owners but it’s still not to be sniffed at. The largest lithium battery, used in bikes like the Road King, saves over 7.7kg over the stock lead-acid battery. That’ll make your bike that bit easier to manoeuvre, especially when pushing it out of the garage and when riding at low speeds. 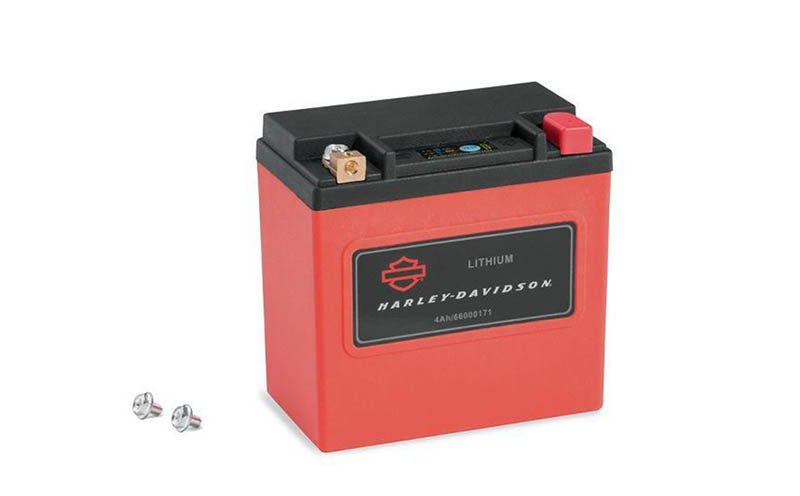 Harley-Davidson also know the merit of lithium over lead-acid which is why they sell their own-brand lithium motorcycle batteries but boy, are they expensive!

There are three genuine H-D lithium motorcycle batteries, which cover a majority of the bikes Harley have made in the past two decades. There are a couple of exceptions; bikes like the V-Rod run batteries more commonly found in Japanese motorcycles and we can supply a fitment for those too.

The batteries are rated at 4Ah, 6Ah and 8Ah. They are all the same physical size but the number of cells within each battery is different and that’s what changes their cranking power and amp-hour rating. In case you’re wondering, the standard size for a Harley Davidson Lithium Life battery is 146mm tall, 150mm wide and 87mm front to back).

The cranking ability of a battery is important as it’s what will get the motor running but the Ah rating less so. This gives you an indiciation of how much power is stored in the battery and therefore how long the battery could run the bike’s electrics and add-on items. So unless you spend a lot of time with your Harley’s ignition on – with the radio playing, heated grips on and without the engine ticking over, then Ah doesn’t make any real world difference.

See all of our Harley-Davidson lithium batteries here

The chart above shows the genuine Harley Davidson lithium batteries and the genuine lead-acid (normal) batteries. It shows you how much weight you can save, compared to the stock battery that came in your bike.

The chart above shows the difference between the cranking ability (CCA. Cold Cranking Amps) of a standard lead-acid Harley Davidson battery, a lithium Harley-Davidson battery and our lithium equivalent.

As you can see, our lithium battery has over 20% mo

A lead acid-battery’s cranking power also drops off a cliff if the battery isn’t fully charged, which is why some times a normal battery will operate the lights and instruments but when you go to fire the bike up, it won’t have enough oomph to kick the engine into life. Because a lithium battery can deliver this power pretty much irrespective of its state of charge, it’ll ensure your Harley starts well every time.

Price Comparison between Harley Lithium Batteries and ours 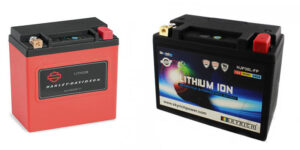 We appreciate that you might prefer to stick to genuine H-D parts but what if we said our lithium batteries are made in Germany, they’re an OEM fitment for some manufacturers and they come with twice the warranty that a Harley Genuine lithium battery does?

Our Harley lithium batteries are significantly cheaper and, like the Harley ones, they come with the Harley-fitment terminals and spacers to ensure the battery fits perfectly in your battery box.

Harley have a fairly sound approach when it comes to batteries. Unlike Japanese manufacturers, who fit the physically smallest battery they can into their bikes, Harley have a different approach. These lithium batteries will fit into pretty much any model (except models like the V-Rod) as they are all physically approximately the same size. You just choose the cranking power you want and use the supplied foam padding to ensure a snug fit.

Just look at the picture above, it shows a genuine Harley lithium battery and our JMT battery. Don’t they look similar? Harley are candid when it comes to revealing who makes their batteries but don’t you think they look like they are made in the same factory? Why pay more? 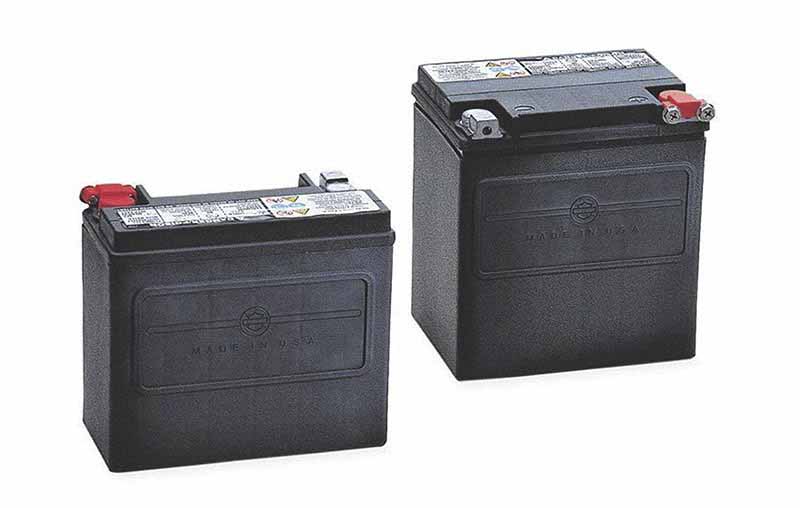 Harley-Davidson are not a discount brand, we get that but their battery prices are insane. Even their normal AGM (lead acid) batteries are expensive compared to our lithium batteries.

On the table below you can see a comparison between the cost of a heavy standard AGM genuine Harley battery and our lithium equivalents.

Just check out the table to see the price difference. Plus Harley batteries only come with a 1-year warranty (because most lead-acid batteries fail around to 2 to 3 year mark). However our lithium motorcycle batteries have a 2-year warranty and an expected life of between 5 and 10 years. They are good value for money.

Buy a Lithium Battery for your Harley 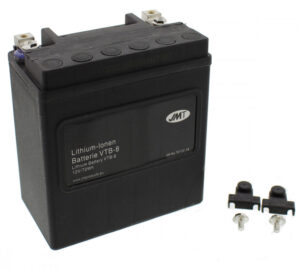 Here at Two Tyres we sell quality German-made lithium Harley Davidson batteries that are an exact swap for the battery that’s currently in your bike. They are built to the same physical size, so they slot right in with no faffing around with spacers and padding. However they weigh around a quarter of your stock lead-acid battery and have a higher cranking power.

Click here to see all of our Harley-Davidson lithium batteries.

Can I fit any sized battery to my Harley?
Yes, if you want a better cranking capability and faster starting, in most cases, you can. Harley-Davidson battery boxes are big, designed to accommodate their lead-acid batteries. All Harley-Davidson lithium batteries are the same physical size as each other; the larger capacity batteries just have more cells in them. Our JMT batteries are also all under the size of a standard lead-acid battery. So if your battery uses any of the Harley codes above, then any Harley or JMT lithium battery will fit.

What’s the different between a 65958-04A and a 65958-04B?
Harley Davidson’s three main battery model numbers for standard batteries are 65958-04, 65989-97 and 66010-97 but you will also see the letters A through to D (at the time this article was written). What Harley do is add a letter onto the end of the model number and then every couple of years they move that letter along one, so 65989-97A becomes 65989-97B and now 65989-97C and next it will be 65989-97D. This allows the dealers to know how long the battery has been on the shelf, so they can supply one with a bit more life in it and not one that’s going to fail. This kind of makes sense for lead-acid batteries that will sulphate over time but it’s not required on a lithium battery, which won’t expire if it’s left on the shelf for a year.

Can you desulphate a lithium motorcycle battery?
No because lithium batteries don’t sulphate.

Should I trickle charge my lithium battery?
You can but you really don’t need to. Lithium batteries don’t like to be trickle-charged in the way a lead-acid does and frankly, they don’t need to be.  Lithium batteries don’t lose their charge like a lead acid would. In 6 months, a lead-acid would lose around 50% of its voltage, mainly due to sulphation of the lead plates. However a lithium battery would lose around 15-20% of its charge in this time. The other crucial point is that a lead-acid battery has virtually no cranking ability when it reaches 50% charge state whereas a lithium battery can crank all the way down to 10%. So a lithium battery sat for 12 months will most likely still start your bike, a lead-acid very probably won’t. If you run a tracker or alarm from your bike’s battery and therefore you have battery draw, if your bike is sat and not being run for months, then you can top up the battery with a charger but unplug it once it is done.

Do lithium batteries have a longer service life than lead acid?
Yes, a lithium battery with a built in BMS should last a minimum of 5 years and up to 10 years. By comparison, over one-third of lead acid batteries will fail within 3 years. The failure rate of the JMT lithium batteries that we sell is around 2% in the first 2 years and our JMT batteries are covered by a 24-month warranty for peace of mind. Harley-Davidsons get through standard batteries because the engine produces a lot of vibration which damages the plates in a lead-acid battery. With a lithium battery you won’t have that problem.

Who makes Harley-Davidson batteries?
For a long time Yuasa supplied all the lead-acid batteries for Harley-Davidson but they have recently switched to Deka. We are not sure why H-D made the switch but Deka are an American firm and it could be that Harley wanted to be able to stamp ‘Made in the USA’ on their batteries. As far as the lithium batteries are concerned, we cannot find out who makes Harley’s batteries but if you look at the pictures above you can see how similar the Harley and JMT batteries are. Don’t you think they’re made in the same factory?

If you aren’t sure which battery you need or you have any other questions about motorcycle batteries, feel free to shoot us an email using the contact form or you can call us on 0207 205 2205 and we’ll be happy to advise you.

We’ve put together a great promotion on the very popular Pirelli Diablo Rosso 2 and Rosso 3 tyres.

In this guide we’ve put together the best tyres you can fit to your classic bike to get it looking and handling just right.

Purchase and fit a set of SportSmart TT, SportSmart Mk3, RoadSmart IV, Mutant or Trailmax Meridian tyres between 1st April and 31st May 2022 and Two Tyres will throw in free fitting.